The question we investigate is whether children employ similar strategies in learning these two types of languages, or whether they approach the acquisition task from a language specific point of view. To investigate how children acquire languages with ergative structures we investigate the acquisition of ergative marking in a number of typologically different languages. The results of this research show that from early on children are sensitive to the structures exhibited in the languages they are exposed to rather then rely on general language-independent strategies.

The outcomes of these studies have appeared in an edited volume: 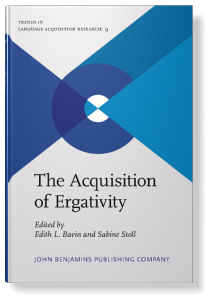